In recent years, Daniel Erdmann has become known mainly for two trios: Velvet Revolution (with Theo Ceccaldi, violins and Jim Hart, vibraphone) and Das Kapital (with Hasse Poulsen, guitar and Edward Perraud. drums). Both pan-European, French-based soloist bands were enthusiastically acclaimed by audiences and the press. They received annual awards from the German Record Critics as well as a jazz “Echo”, released several albums and toured internationally. Most recently, Erdmann has also attracted attention alongside the unique Aki Takase, for example at the Jazzfest Berlin 2021 and with the album “Isn’t It Romantic?”.

Erdmann’s bands unite extremely playful and accomplished musicians who, together with him, create a special, immediately identifiable sound. Exactly the same can be said about his latest trio Organic Soulfood. Here Jim Hart plays regular drums instead of vibraphone, and the cooperation with Hammond organist Antonin Rayon is completely new. Hammond organ? If you now spontaneously think of Jimmy Smith, you can re-park in your head. Because Rayon, born in 1976, plays the singular B3 monster anything but traditionally. Rather, with a very personal, progressive style, he fits seamlessly into Erdmann’s environment of clever and innovative musicians.

It was only in January 2021 that Daniel Erdmann developed the idea for Organic Soulfood, and in November the group celebrated its spectacular stage premiere at a festival in Frankfurt a.M.. Rayon’s subtle, sometimes almost abstract, sometimes almost electro-aesthetic sounds, harmonies and bass lines interweave perfectly with Erdmann’s warmly timbred and purposefully roughened tenor saxophone tones. Fired also by Hart’s variable drum grooves, Erdmann modulates expansive expressions again and again, goes out of his compositions pointedly in improvisations, but always preserves the form. Together, the trio develops impressive dynamics and a colourful, independent sound language.

The cooperation with Rayon is anything but a quick fix. “I heard Antonin at a festival over 10 years ago and have had him in the back of my mind ever since,” Erdmann explains. “The starting point of my projects are always certain sound ideas. Why I am now striving for this somewhat more classical jazz sound, I can’t say exactly. It’s probably because of my original plan to go to New Orleans in 2021 and write new repertoire there.” The band name Organic Soulfood reflects Daniel Erdmann’s humour and his current mood.
“It’s a play on words, of course, but it also came out of a need to play music where soul, instinct and intellect harmonise. I need music as soul food in these times and that’s what I’m trying to get across with the band name.” 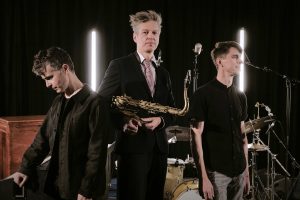 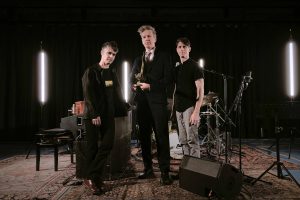