â€˜Less is moreâ€™ is a well-known saying. Itâ€™s an oxymoron because of its paradoxical nature. Paradoxes take us beyond ingrained patterns of perception, reasoning and action. Thatâ€™s what is in the expression as coined by the old Greek. This newly formed unitâ€™s music is simple without being simple. It sounds vaguely familiar and strange at the same time. It resembles a lot known and nothing known. It has a fairy tale quality and as we know, in fairy tales lots of wondrous things can happen. Down to earth and far remote, avant-garde and in the vernacular, accessible and beyond is this music.

Drummer Peter Bruun from Copenhagen has proven many times in his musical career that he finds his way around even in paradoxical musical settings:
Be it with Django Bates’ BelovÃ¨d, in the trio of Samuel Blaser, with Tim Berne or Uli Kempendorff’s FIELD.Â In his new unit he has gathered three like-minded musical fellows under the All Too Human (ATH) flag. Through the years he undertook a lot of terra incognita expeditions with pianist Simon Toldam, guitarist Marc Ducret and trumpeter Kasper Tranberg. It connected and connects them on deeper levels in their musical interaction.

Does the ATH flag then signal some kind of shift down or reinvention? Yes and no! The groupâ€™s music combines the unimaginable with acceptance of the evident (like in fairytales). It becomes manifest in Bruunâ€™s own role serving the bass function with his right hand via a keyboard and drumming with his left hand simultaneously. 1+1 = 1 in this case.

Presenting familiar things in an unfamiliar light to trigger experiences of joyful surprise is at the core of entertainment and it is at the core here too. The inviting music might remind listeners vaguely to some known things, might trigger memories of the past â€“ an all too human inclination when venturing into new territories and forms.

During the next minutes itâ€™s always melting down and morphs into a surprising clear gestalt of its own due to the crystal sharp guitar of Marc Ducret, Toldamâ€™s shimmering vintage keyboards and Kasper Tranbergâ€™s clouding over trumpet. Sharp, clear and forceful with a strong inner swing and a hot, burning lava kernel, their music offers a solid and igniting ground to enter the joyful communal game of listeners/audience and artists of giving transient significance to the sounds.

Peter Bruun is a unique voice on the European scene for contemporary music and music that makes room for improvisation. He is a highly skilled improviser as well as an interpreter. â€‹The combination of musical variety and uncompromising expression makes Peter Bruun one of the most in-demand players on the expressive jazz scene. His authority on the instrument has only grown stronger the last 10 years with impressive international touring. From Royal Albert Hall to china he has stood by his vision of presence through improvisation. His playing reflects a combination of intuitive expression and a fully embodied instrument.

As a composer he has received broad recognition for a variety of different project; the pop-art group Eggs Laid By Tigers as well as his previous solo album Unintended Consequences.

â€œ…Vernacular Avant-Garde is a haunting record. A kind of magic carried by a quartet at the top, whose complementarity is incredible.[…]
…These fluid variations cross the entire disc but are also found within the pieces themselves. The success of the album lies in these alternations and in the continuous dialogue between complexity and simplicity, known and unheard of, old and contemporary, perfectly summarized by the title of the album, Vernacular Avant-Garde. […]
…Peter Bruun offers a jubilant musical synthesis as it seems natural and accessible, making this disc a nugget to discover urgently.â€ Cityzen Jazz, Julien Gros-Burdet

Photos: For hi-res pictures, click on the picture below. 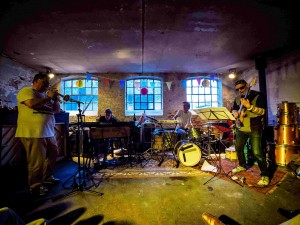