After an open tribute to film-music composers (Bandes Originales / 2017), the trio formed by Vincent Courtois, Daniel Erdmann and Robin Fincker takes hold of the immense work of Jack London and produce an album, recorded on the lands of the writer in California, portraying the complexity and beauty of the Martin Eden author’s work.

“I discovered Jack London fairly recently, more precisely in August 2016: First the South Sea Tales and then the groundbreaking, indispensable Martin Eden”, remembers Vincent Courtois. “This dense, semi autobiographical work, which is so powerful and so rich, has been by my side in my daily life ever since: a companion on my travels and an inspiration to my music.”

The idea soon came to the cellist to organise a tour of concerts in the footsteps of Jack London and record an album inspired by his work, in the writer’s fief in Oakland, California. The trio which has since become one of the most valuable formations of European jazz since their first album « Mediums » in 2012 crossed the Atlantic accompanied by the sound engineer Gerard de Haro (La Buissonne) and first played a couple of shows on the east coast (Boston, New York) before reaching the bay of San Francisco where a recording with an audience had been organized. The day before the recording, an appointment was made with Jack London’s great-grand daughter Tarnell Abbott, in the writer’s farmhouse which has become an historic park on the eastern slope of Mount Sonoma. Vincent Courtois, Daniel Erdmann and Robin Fincker even improvised on the author’s grave, a few meters from the ruins of his ranch which went up in flames. 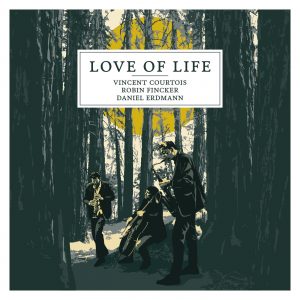 This moment was captured by the photographer Loic Vincent and was to become the Love of Life album’s cover.
All the album’s compositions are based on Jack London novels and short-stories, which Courtois, Erdmann and Fincker have been discovering ever since this project took shape in the head of the cellist. Courtois regularly improvises and writes around prose texts and poems (with the actor Pierre Baux and the writer Frédéric Boyer in particular) but had never taken his trio on this fertile ground.
Here, it is the music aims to respond to the stories of Jack London whose real force is, according to Vincent Courtois, “to reach into our lives with his own, to become the friend, this brother, comrade in whose company each day brings a new story”.

From Jack London, Courtois drew a certain rhythm, a pace, even an urgency. He was more interested in the underworld reporter, the political writer (Goliah, The Dream of Debs on the utopia of a general strike) the man of a thousand lives who knew vagrancy (The Road) and prison-life (The Star Rover) as much as celebrity, than the author of Call of the Wild.

The richness of the Martin Eden masterpiece is evoked on two mirrored tracks – the first one inspired by the chaotic and clumsy beginnings of the book’s main character and which will recall the Mediums album’s repertoire and the second one based on the last chapter of the book, synonymous with elevation and liberation. The two versions of To Build A Fire are also subject to two compositions that illustrate a certain duality in the perception of London’s writings.

“It seems to me that for Jack London, the context is sometimes more important than the story”, says Courtois, who guided his true-false chamber music trio far from its comfort zone, accompanying the Jack London gold-searchers in Alaska (Trust) or in the Canadian tundra (Love of Life) and seal-hunters in the North Pacific (The Seawolf).

Accustomed to long-term collaborations and unpredictable, multi-faceted proposals (for The Demons of Tosca, he imagined a variable-sized group proposing concerts in prisons and schools), Vincent Courtois formed â€œOaklandâ€ in parallel of the â€œLove of Lifeâ€ repertoire, where the trio interacts with singer-songwriter John Greaves and the comedian Pierre Baux.around on texts drawn from Jack London’s Martin Eden.

Vincent Courtois studied classical cello at the Conservatory of Aubervilliers, first with Erwan Fauré, and then with Roland Pidoux and Frédéric Lodéon. He also played with Didier Levallet and Dominique Pifarély, and since 1988 in bandslead by Christian Escoudé and Didier Levallet (“Swing String System”) in Paris. In addition he started his own quartet in 1990, releasing his debut solo album Cello News the same year.

He played in the duo with Martial Solal from 1993, with Julien Lourau in “Pendulum Quartet”, with Franck Tortiller in the band “Tukish Blend” and the trio “Zebra 3”, and in addition he played with Xavier Desandre Navarre. He has also contributed to the album Marvellous (1994) with Michel Petrucciani, Tony Williams and Dave Holland.

In 1995 Courtois performed his first solo concerts, he played within Francois Corneloup’s Septett, and collaborated with Louis Sclavis making music for film and theatre. He also recorded two albums with the quintet of Rabih Abou-Khalil, and in 1998 he participated in an ensemble led by Pierre Favre, and a trio with Yves Robert. In 2000 he performed in three trio constellations, in 2002 a quintet played at the festival “Banlieues Bleues”, and in a trio with Ellery Eskelin and Sylvie Courvoisier.

In 2005 Courtois joined Michele Rabbia and Marilyn Crispell to play in Bamako with his own trio. He was involved with Henri Texiers in recording the music to the movie Holy Lola by Bertrand Tavernier. His trio with saxophonists Robin Fincker and Daniel Erdmann has been around for 7 years. Their debut Mediums appeared in 2012. The award-winning album Bandes originales was released in 2016.

“Violoncello, saxophone, clarinet/saxophone – that’s how a trio also can work and sound: as a consonant unity elating listeners’ souls, as a consonant unity with emerging flashy color layering, with amazingly flexible roles in terms of melody, rhythm, texture, with a many-sided approach from moment to moment, phrase to phrase, thereby creating an intimate as well as orchestral impact – extraordinary, excellent, exhilarating and conquering. Melody is key here in company of its beguiling semblances and sediments, source of inspiration from turbulent bygone days was Jack London (1876-1916), put on record it was in Oakland, California, once the inspirator’s hometown and the rest is for its joyously humming listeners.” Henning Bolte, Written in Music (NL) 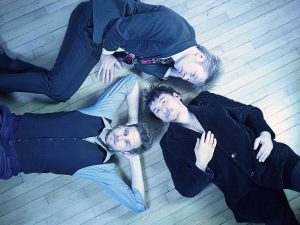 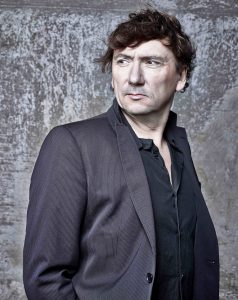