In close colaboration with Asia Networks

Berlin-based Japanese pianist Aki Takase and saxophonist Daniel Erdmann, who was awarded the prestigious SWR Jazz Prize in autumn 2020 shortly before the recent Lockdown, first met in the mid-90s when Takase was teaching improvisation at the Berlin Musikhochschule “Hanns Eisler”, where Daniel Erdmann was studying at the time. Subsequently, Aki Takase invited Daniel Erdmann to play in her sextet, which consisted of some of the most outstanding musicians of the Berlin scene of the 90s, such as Rudi Mahall and Tony Buck. In 2000, Daniel Erdmann received a scholarship from the German-French Cultural Council and moved to Paris – this initially ended the collaboration with the style-defining pianist, who received the SWR Jazz Prize in 2002. 15 years later, Aki Takase and Daniel Erdmann, who had been living in Reims in the Champagne region for many years, met by chance at the Paris airport. There they agreed to finally play together again. In the same year, they formed the quintet “Japanic”, which released the album “Thema Prima” in 2019. The two began their duo collaboration in 2019 and intensified it during the first lockdown caused by Corona in the spring of 2020. Daniel Erdmann, at home in Reims, Aki Takase in Berlin, rehearsed from then on every Wednesday for a quarter of a year together via Zoom. Despite the restrictions and the technical pitfalls, they both say, the whole thing had one good thing: complete concentration on the project. Then, when a small window of opportunity to travel opened up in the summer, they both met in Budapest to record an album over three days at BMC Records’ Budapest studio in early August. Shortly before the recording in the Hungarian capital, the two played a streaming concert at the Berlin club A-Trane, which was recorded by public broadcaster RBB (see the video below). A French concert premiere already took place in November 2019 as part of the Jazzdor Festival in Strasbourg. About this concert, Bruno Pfeiffer wrote in the jazz blog of the newspaper Liberation: “Complex chords and sovereign melodies together with a complicit balance, where the protagonists cross the finish line hand in hand like two runners. In the end, we leave the duo with the urge to dance”. At the beginning of June 2021, Aki Takase and Daniel Erdmann were awarded the inaugural German Jazz Prize. 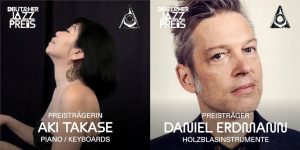 Daniel Erdmann was born in 1973 in Wolfsburg, Germany. He has been playing the saxophone since 1983 and studied a.o.with Gebhard Ullmann at the Academy of Music Hanns Eisler. He recorded albums for various labels, i.a. BMC, ENJA, ACT, LABEL BLEU, INTAKT and plays concerts worldwide with bands and musicians like Das Kapital, Vincent Courtois, Aki Takase, Carlos Bica, Heinz Sauer, Samuel Rohrer, Henri Texier. In 2014 he founded the German-French company DAS ATELIER and his new band Daniel Erdmann’s Velvet Revolution with ThÃ©o Ceccaldi and Jim Hart. The first album of the band ( BMC Records ) was awarded the Year Award of German Critic and an Echo Jazz. In autumn 2020, Daniel Erdmann was awarded the prestigious SWR Jazz Prize at the Enjoy Jazz Festival. At the beginning of June 2021, Daniel Erdmann was awarded the inaugural German Jazz Prize.

Aki Takase was born in Osaka and grew up in Tokyo. She already had piano- lessons when she was three years old. Piano was her main subject during her studies at the Tohogakuen University in Tokyo. 1979 she had a longer stay in the U.S.A. 1981 at the Jazzfestival at Philharmony of Berlin, the first celebrated performance with her trio featuring Takeo Moriyama and Nobuyoshi Ino in Germany. Numerous concerts and recordings with Dave Liebman, Sheila Jordan, Cecil McBee, Lester Bowie, Bob Moses, Joe Henderson, Niels Henning Orsted Pedersen and many more followed. In the ninetees very successful duos with the singer MARIA JOAO, and with the saxophonist DAVID MURRAY. Work in trio with REGGIE WORKMANN and RASHIED ALI in duet with ALEX von SCHLIPPENBACH, as well as occasional projects with the TOKI STRING ORCHESTA.  Record- Awards of the UDJ Aki Takase got in 1990 (Play Ballads of Duke Ellington), 1991 (Shima Shoka), 1994 (Blue Monk), and 1998 (Duet for Eric Dolphy). From 1997 to 1999 she worked as guest-lecturer at the university for music „Hanns Eisler “ in Berlin. 1998 she received the Critic Award of the „Berliner newspaper“. In the year 2001 her Solo-CD’S „Le Cahier du Bal „(Leo Records) was published as well as her „W.C.Handy-Project“ with Rudi Mahall, Nils Wogram, Fred Frith and Paul Lovens under the name „St. Louis Blues“ (Enja Records). Aki Takase received the SWR Jazzaward 2002 for the „St. Louis Blues“ CD and in 2004 she was awarded the prestigious Yearly German Critics Award (Jahrespreis der dt. Schallplattenkritik). Since then she is working on numerous new projects which are duos with Alexander von Schlippenbach, Lauren Newton, Silke Eberhard (Ornette Coleman Anthology) and Louis Sclavis as well as in Trio with LOK 03 (Alexander von Schlippenbach & DJ Illvibe), TAMA (Jan Roder and Oliver Steidle), Aki and the Good Boys, La Planete Quartet with Louis Sclavis, Vincent Courtois and Dominique Pifarely, to mention just a few. Aki Takase is one of the most creative jazzartists nowadays. For years she is working with the dancer extraordinaire  YUI KAWAGUCHI in the ongoing project called DIE STADT IM KLAVIER. Aki Takase receives the Berlin Jazzaward 2018. At the beginning of June 2021, Aki Takase was awarded the inaugural German Jazz Prize.

Photos © Dirk Bleicker (Click the image for a larger view) 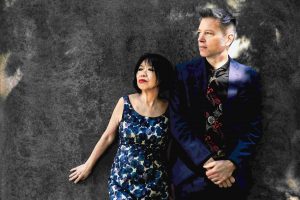 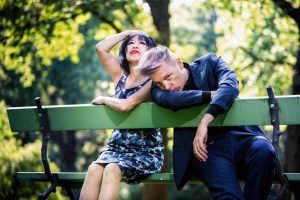