New CD: What’s Not Enough About That, February 2020

“Dance to it, make love to it, consume it, listen to it, stare at the clouds to it!” Iggy Pop
“One of my discoveries for the London Jazz Festival… Good is Good” Gilles Peterson
“They were the unexpected stars of a glitzy show”  John Fordham, The Guardian
„Like Portico Quartet on steroids“ Jazzwise

What’s not enough about that?!

Following the acclaimed release of ‘Do Not Be Afraid’ and a busy tour that took them from
UK to Europe and back, including a stellar performance at Womad captured by BBC Radio
3, Vula Viel return with a new album.
The band continue their sonic explorations around the gyil, the wooden xylophone of the
Dagaare from Upper West Ghana, on their brand new set, ‘What’s Not Enough About
That’.

Picking up from early 2019’s ‘Do Not Be Afraid’, the new album breaks new ground as Bex
Burch (gyil), Ruth Goller (bass) and Jim Hart (drums) continue to forge their own unique
fusions. While ‘Do Not Be Afraid’ developed ideas around disciplined ‘rhythm wheels’,
rhythm patterns in regular cycles set to the band’s angular instrumentation, the new tracks
stretch out the band’s sound, at times delicate and at others moving into raw post punk
soundscapes.
Extensive touring brought the band from London’s most revered alternative venues such
as Café Oto and Vortex Jazz Club to the stages of Cheltenham Jazz Festival and WOMAD,
the British countryside plus our mainland European dates including Moers Festival, Bezau
Beatz, Willisau Jazz Festival and Artist in Focus at Music Meeting, to take the Vula Viel
sound to Germany, Austria, France, Switzerland and the Netherlands in Europe for a string
of packed jazz festivals – a busy year that cemented the unity of the trio and nurtured their
artistic growth.

“My journey with the gyil has always been rooted in the Dagaare traditions”, explains Burch,
“but through playing live and developing a tight chemistry together, the band is constantly
pushing its own boundaries and finding its own new directions. On this album, I wanted to
bring more space into our music and echo feelings and emotions through the ebb and
flow of the tracks – reflection, hope, urgency, determination, anger.”

Press: Do Not Be Afraid

Sunday Times – Essential Release: “Unconventional band who can take you by surprise… There’s a punk energy to some of the more frenetic performances”

Zakia (NTS) ““Best gig I’ve been to in a long time! An intoxicating blend of punk bass fuzz, polyrhythmic jazz drummming & soul-stirring traditional melodies beaten with joy on the gyil… Not to be missed!”

Gareth Thompson All About Jazz: Bex Burch has made the gyil (Ghanaian xylophone) an unlikely lead instrument, and she leaped onstage to hammer at its carved slats like a blacksmith at a wooden forge. Despite some fuzzy zings through the amplifiers, the gyil sang out with sweet melody under Burch’s knockings. Her songs are built around catchy motifs with lyrics akin to haikus or spirituals. […] Vula Viel’s rhythm setup might have stolen the thunder from a lesser act than Burch. Ruth Goller’s electric bass added raw throbbings with a touch of New York new wave. Drummer Jim Hart’s solo slot was more like something screened in the Guggenheim: a visceral display of bodily power, all intellect abandoned, straining every nerve to thrill the senses. […] This may have been an album launch for Vula Viel, but more nights like this could send their earthborn grooves into orbit. 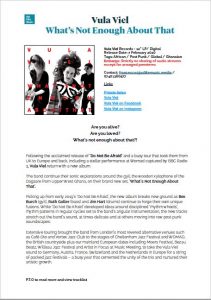 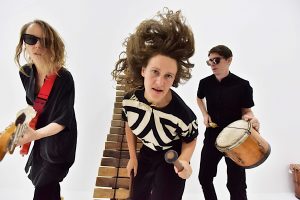 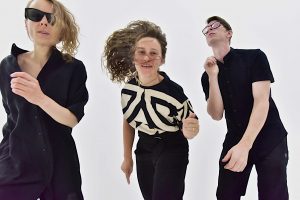