This is what I want. Thank you. To make sounds together without a describable aim, simply because you must meet up and do this… do this what? Do this activity together. Togetherness: that’s it! That’s what I’m hearing! Humans humbly unfolding sound. Together. Sometimes it feels like there is no proper communication left in this world. And then I hear something like this that is only proper communication. Please, never stop. Django Bates, Bern, 2021

Young Berlin pianist Julius Windisch has already impressed critics at home and abroad with his debut releases. London Jazz News wrote of Windisch’s quartet debut Chaos: “The music is original, intricate and engrossing. I’ll definitely watch their progress with interest” and Jazzjournal.co.uk seconded: “Windisch Quartett exhibit wildness and coolness in equal measures – but never strait-laced crotchetsâ€. In Jazzthing Wolf Kampmann praised: “For all its freedom of execution, the underlying tone of the album is exceedingly thoughtful. […] Broken timbres create a pleasantly tranquil mood” and Concerto noted: “The pianist and composer leads his fellow musicians through jagged tunes with a broken-beat feel […] but also shows his fragile side in the form of beautiful, melody-oriented ballads that are enhanced by subtle sound manipulations […].”

Julius Windisch’s new trio, whose debut album will be released by Doublemoon in August 2021 for the series “Jazzthing Next Generation’s, sounds equally idiosyncratic. Aesthetically it breaks many old rules in a clever and vital way. Windisch, bassist Igor Spallati and drummer FermÃ­n Merlo consistently dissolve the typical hierarchy of a piano trio; their musical approach and sound palette also allow influences far removed from the jazz idiom (such as classical modernism, impressionism, minimalism) to shine through. All compositions were written by Windisch and serve as springboards for sensitive, intense collective improvisations, throughout which the role of leader changes hands seamlessly. Pre-composed harmonies and broad musical arcs, shifts between clarity and obscurity, sparingly melodic and dynamic passages as well as specific timbres (e.g. bowed bass, onomatopoeic percussion) create lyrical moods and powerful moments of tension, at times also intriguing atmospheres.

Julius Windisch founded the trio at the beginning of 2020, but even before that he had written a few pieces intended precisely for this line-up. “Igor and Fermí­n are both strongly rooted in jazz history, but are also extremely open to more progressive forms of jazz. This makes them highly flexible and perceptive. Everything I write is understood by both of them amazingly quickly and thoroughly, besides which they bring in many of their own ideas for further development.”

Julius Windisch, born in 1995 and raised in Offenburg, studied at the Hochschule in Bern with Django Bates and Colin Vallon among others, and at the conservatories in Copenhagen, Amsterdam and Berlin. In 2015 and 2016 he was a scholarship holder of the Lyra Foundation Zurich. Fermí­n Merlo (*1992) comes from Buenos Aires and, like Windisch, has lived in Berlin since 2018. In his native Argentina, Merlo was an early bloomer as the son of a double bass professor, playing there and in New York with Tim Berne, Tony Malaby, Leo Genovese, Ralph Alessi and other such prominent figures. Igor Spallati (*1985 in Perugia) studied at the Jazzinstitut Berlin and has since then appeared on various recordings (including Anna Webber/Pirouet) and participated in stylistically wide-ranging projects.

The unshakable belief in the power of the creative impetus, that self-nourishing trust is the primordial impulse of every genesis which can emerge and create something new, original and great from the eternal same nothing. Like a chestnut tree in a park, which first sprouts buds and leaves, then flowers and finally green morning stars with brown fruits without our help, which lie so pleasantly in your hand.

What distinguishes „Pros & Cons“ from all the other productions on piano, bass and drums? Why do Julius Windisch, Igor Spallati & Fermín Merlo once again take up their instruments to add the tenth thousandth and one to the ten thousand already existing piano trio records? Why don’t they just stare in awe at all the troikas of Thelonious Monk, Oscar Peterson, Bill Evans, McCoy Tyner, Keith Jarrett, Chick Corea, Paul Bley, Esbjörn Svensson, Brad Mehldau, Michael Wollny and however they all are called and simply but their hands deep into their pockets and leave them there? Well, the answer is obvious; Because they simply couldn’t do otherwise! Because it would be completely pointless to resist their mission. Because with the said impulse and the resulting confidence, they can counter the immeasurable amount of piano trio records with something completely new, genuine, never before heard in this form. Because their album is the first and only album that will ever be produced in this constellation, regardless of its predecessors and possible successors.

And they’re right. It is no coincidence that music is an indispensable companion to almost every ritual action, explicitly including the rituals of everyday life with all the pros and cons. In the beginning, there was sound. Music is the mother of all religions, life plans and worldviews, an audible interface between physics and metaphysics, based on the inalienable belief in the fulfillment of the unimaginable in the feasible. All you have to do is press a single key on the piano, hum a single note, stomp your foot on the floor once, and worlds are already created. We don’T make music – it’s given to us, whether we’re aware of it or not.

And yet it is visionaries like Julius Windisch, Igor Spallati and Fermín Merlo who have been given the gift of making this revelation audible. A famous guitarist compared musicians to archaeologists. They expose what is already present, cleanse it of the dust that has covered it without breaking it. The brushes necessary for this are their instruments, but their imagination is the look with which they recognize the figure of the hidden under the thick crust of the sediments. Just like Michelangelo, who saw his David in a damaged marble block. He only had to uncover him.

The entire album is hidden in every note, but the album as a whole is nothing more than a parable for the world in which it has been created. Just as the whole tree is depicted in every leaf of our chestnut tree, but the chestnut itself symbolizes the cycle of creation. For no other reason, the music of „Pros & Cons“ seems so incredibly familar the first time you listen to it. It seems new to us, but not in spite of, but precisely because it is already present in us as listeners just as it is in the three artists through whose filter it reaches us. Similar to the annual sprouts in spring… familiar and yet surprisingly new again and again. Wolf Kampmann, Liner Notes, Pros & Cons

Photos © Dovile Sermorkas (Click the image for a larger view) 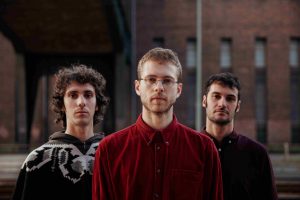 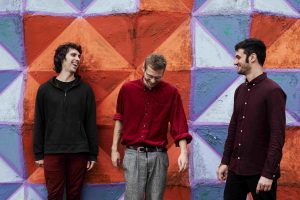